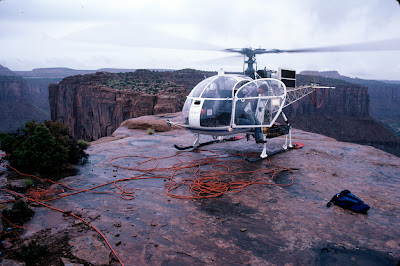 Adjust your monitor for photographs, click on the photo so that it enlarges, and take a look. This is an LZ above Indian Creek in Utah. Notice how the wet Navajo Sandstone really shows it’s colour? Great Photo by Scott Lambert.

Remember the description of the blog says, “or maybe not”, as in “ Travel, Food and Other Things Connected to Laos and Laotians,,,,,, or maybe not” well this is that “or maybe not“ part. Actually there is a tenuous link in that one of the first pilots I knew flew for Air America in Laos, I have no idea what kind of aircraft he flew, from what I gather he was in a few different kinds of fixed wings.


I like Lamas. A Lama besides being a filthy animal that looks like a goat and spits, is also the helicopter with the world's altitude record, for thirty five years running. We used to say that at lower elevations below 12,000 feet, the engine was governed down so as to not tear the blades off with the excess power. Who know if it’s true. The three blades are wide for grabbing lots of air, and the fuselage has no skin so the cross winds can blow through the aircraft and to save weight.

A lot of helicopters will first get some forward speed up before gaining altitude or else they are very sluggish going up from a hover. When the pilot pulls up the collective on a Lama the aircraft feels like it’s a yo yo at the end of some giant’s string. It goes up in a hurry.

If you are waiting to get picked up, on the lee side of an avalanche break to get out of the snow that‘s blowing sideways, sixty miles from a road, with night time temperatures dropping out of site, and winds gusting to seventy from a stationary lenticular cloud, there’s nothing to compare. Just the sound of a Lama is enough to remind you of warm hotel rooms, chicken fried steaks, and all the other thoughts that come at the end of the day.
5 comments: Links to this post

Up and Down Saw

Click on the arrow lower left (twice) to play the video.

This is the only time I used the video function of my Pana FZ7, the high resolution didn’t work. I wasn’t much into video anyway, still trying to figure out how to take a picture.

These Kammu sawyers were fulfilling a contract to provide wood to the relocated villagers of Ban Nammat Mai. I don’t know what you would call the new village of Nammat Mai, Nammat Mai Mai? I also don’t know why the Akha contracted out the cutting of wood rather than doing it themselves. Certainly an up and down saw doesn’t take that long to learn to use? Notice the rice in the background sown between the burnt trunks of the trees. New slash and burnn due to relocation?

I don’t know what species of wood they were cutting, or how much the contract to cut them was worth especially on a piecework basis. The Kammu guys said they usually cut three or so pieces a day. I also don’t know why they didn’t just chop the wood flat with a knife they way they do in the hills. Notice the peg in the saw cut at the end of the log, probably to keep the saw from binding. How about the language they are speaking, that aint Lao!

One year when my grandfather was a boy he cut his hand badly in the saw mill and so hea nd his brother contracted to cut railroad ties off a wood lot for ten cents a tie. They used a regular axe and a broad axe. The broad axe is used with one hand to cut the logs to flat. I don’t think they got rich on that deal. Seventy five years ago, before workers compensation or Social Security in America. I wonder in 75 years what kind of a world the grandsons of these Kammu guys will live in.

Sticky Rice Stuck to the Tree 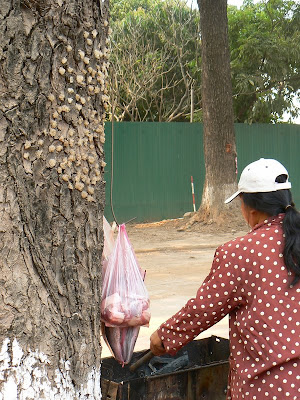 I can only guess as to the meaning of sticking a small pinch of sticky rice to a tree above the place you sell barbeque from every day.

I would assume this is a carry over from the worship of animals, house spirits, and the like. Probably thought to bring good business to the woman. I watched her carefully affix a new pinch onto the tree just before I took the photo.

For the record she had a little of everything, Sam San Moo that three skins of pork, pieces of chicken, and five stuffed fish. Quite the variety.

Anyone definitively know the reason for the rice, or perhaps the name of the habit? 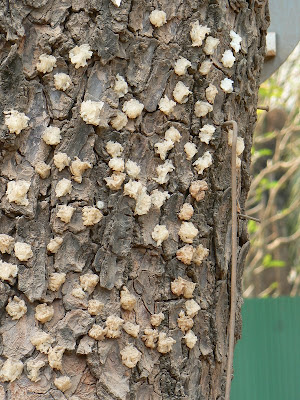 About Lao food and Blogs 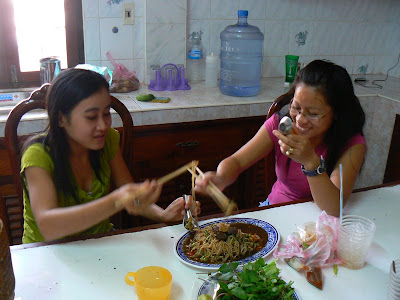 
Lately Lao Bumpkin has been getting hits originating from food blogs mostly by Lao Americans. I’m psyched to know that there are people interested in the food of the culture their parents come from. The bloggers are young, articulate, and sometimes very funny. (one is called I eat padek) If you are looking for the nuts and bolts of how to cook Lao food it’s there. What, how much, and often with videos and ingredients lists. To say I’m impressed is an understatement.

I had been worried that the food of Laos would be lost with the transition to western society. I often hear from travelers to Laos that Lao food is bland and tasteless. Well I guess that stuff served up at restaurants with English menus is. I mean how exactly do you cook laap without pa dek, organ meat, or bang nua? Oh and no hot peppers, king, kah, and so on. You end up with hamburger seasoned with a little mint. More often it’s fried rice, a sure fire meal guaranteed not to offend the delicate palate of the tourist. Or mixed vegetables. I digress.

The web sites of these new Lao cooks are written mostly in English. For any of the Lao cooks who read this sorry about the lack of specificity. I assume anyone reading knows their way around a Loa kitchen already. My intent isn’t to provide a step by step, but just a rough guide. 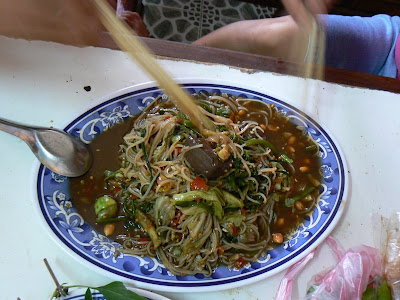 I know what your asking, what the heck are they eating. It’s like tom makune but with those noodles that you use for foe, sen foe or mii. It also contained whatever they wanted to throw in. Toasted fresh peanuts, padek, kapi, bang nuah, cabbage, that green called pak bong, meat balls, squid, and a couple pieces of nuat on top, that’s the brown tofu. 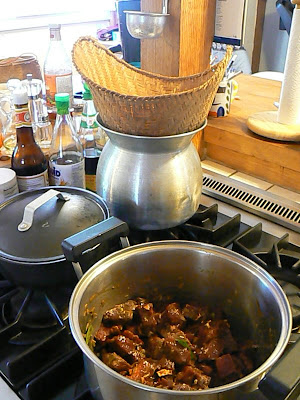 Obe on the stove ready for a long simmer


It’s hard for me to start talking about obe without first trying to explain how to say it. I always thought it was pronounced ope like in the word dope but without the d. I don’t think we have a short b sound in English as in obe. The b really is a b, as in baw beh the sound for goat in the lao alphabet, it’s just that the sound is so short we have nothing to compare. I get away with it when I say ope.

Anyway obe is made from meat and is mostly meat. I’ve had it made from all different kinds of meat but it lends itself to wild meat, the spices are strong. I’d imagine porcupine, rabbit, raccoon, and all those other critters would do just fine, especially with the bones cut up along with the meat, lets the flavour out. 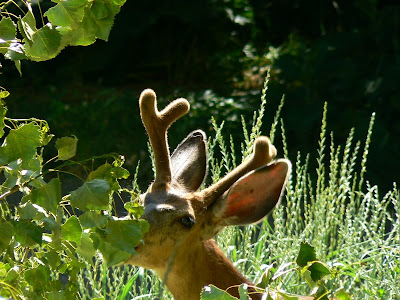 Above is a mule deer, affectionately known as a muley. I don’t like deer as much as elk, the deer is a little gamey tasting making it a prime candidate for ope .In Laos I’ve also had ope made from civet. I’ve heard it’s made from all the usual wild foods especially tough meats, and animals with a lot of bones. By chopping the bones across the ribs and cutting the backbone into pieces a lot of the good juices are released into the sauces. 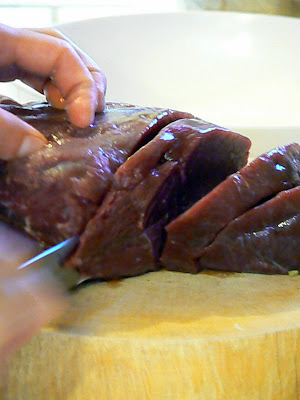 This piece of venison (deer meat) was given to me by an old friend of mine last week. I’ve known him for probably twenty five years, since we were both pretty young guys. Being a farm boy he was familiar with butchering animals and we used to take advantage of the many road kills on the sides of the highway. Nowadays he uses a big old 300 magnum that seems to drop just about anything he points it at. 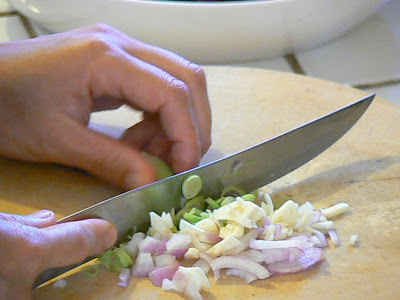 The fresh spices for this batch were lemon grass sliced very thin so that you can eat it, shallots, garlic and bai kii hoot, (kafir leaf). Our lemon grass has matured enough to have the thick stalks that you need to actually eat the stuff, most other years we plant it too late and all we can use is the grassy parts in soup. The bai kii hoot is from our house plant that we’ve had for a few years, in the winter we bring it in and it becomes a house plant. 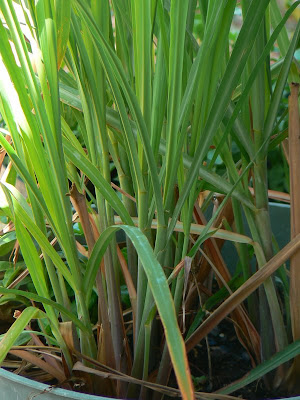 Lemon grass in a pot 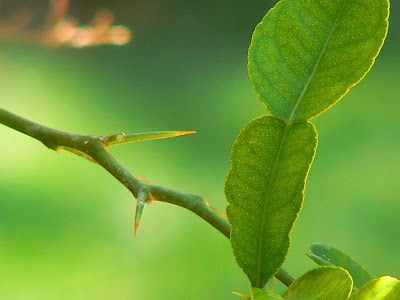 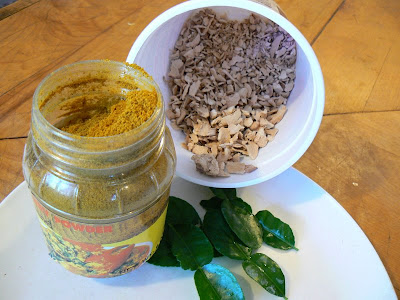 
Normally kah (galangal) is fresh also. While in Laos my wife bought a few kilos and dried it, the customs police decided that it was ok so we now have a couple years supply of the stuff. The dried stuff from Thailand in a jar labelled “curry powder” is that yellow spice that Kohn Kak and Malaysians use, I think it’s turmeric. 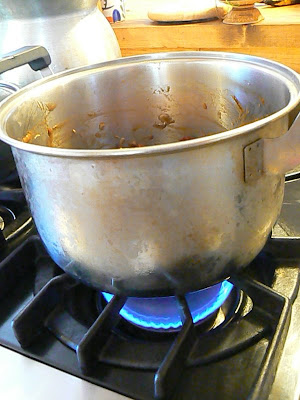 Stove cranked up to high


The cooking method is obvious and simple. The dried stuff is pulverized in the coke, the wetter lemon grass, garlic, and shallots are added then lastly some naman hoi, (oyster sauce) bang nuwa, some nam see yu and the bai kii hoot. The cubed meat is kneaded into the sauce then quick fried at a high heat in the bottom of a pot stirring constantly. 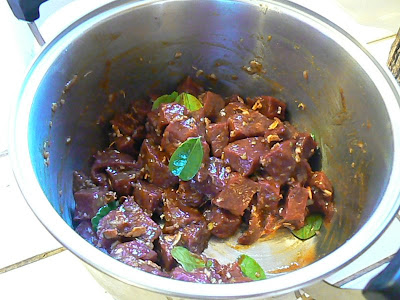 Ope ready for the long simmer

After a couple of minutes the heat is turned down as low as it will go and a little water is added as needed to keep things from burning. With an occasional stir the pot is left cooking for an hour or two or three until the meat is tender.
8 comments: Links to this post