It's a cold weekend, the cook here decided to use the fresh meat I foraged earlier in the week. I'm starting to get back into blogging. Ok, it had a couple slices of onion in the water too.

Some might be familiar with the Thai iteration of kowpoon called canome jin. It's a fairly common street food in both countries. It's a soup. Usually some kind of coconut broth with shredded chicken or pork over soft noodles with shredded uncooked cabbage and mint. There are many variations and choices of condiments.

This one's different. The broth is from pho (fuh), and there is no coconut milk. There is still shredded cabbage and soft noodles and mint, but also there is thin sliced deer liver (extremely mild) deer heart, and deer lungs.

I don't normally like kowpoon, tried it lots of times, it's just too sloppy and usually cold. I liked this a lot better, still problems slopping down the wet noodles, but they weren't coated with coconut milk. The fuh water was piping hot. I skipped the lungs and just ate heart/liver, a perfect post-hunt food. Seventy seven hours ago this dinner was wandering the woods at eighty four hundred feet and ten below zero degrees, in the falling snow. 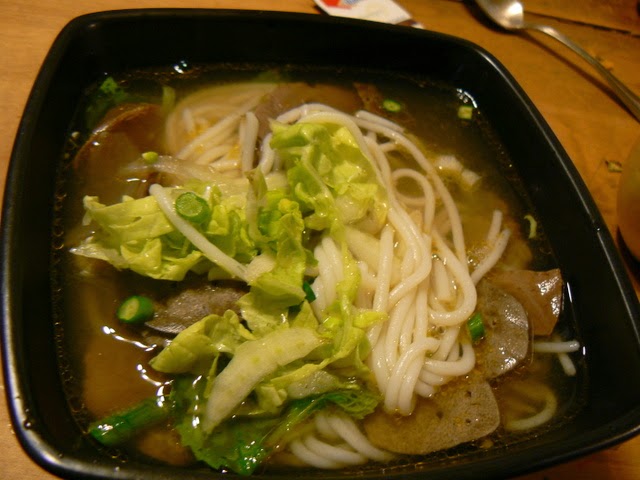 The cook added galangal and lemongrass leaves to mellow the smell of boiling offal from the soup in the kitchen. I also had chopped green onions in the bottom of the bowl with the other greens. I squeezed a couple slices of lime and ground some black pepper over the top.
No comments: Links to this post