I don't often post about Lao Americans. Mostly this is a blog about Laos and Laotians, but I personally am very interested in the subject.

Most of my Lao friends here are people who came to the US as adults, either recently or back in the day. They are more comfortable speaking Lao than English. I'm also friends with people who are Lao by ethnicity but who grew up in America. I feel proud when I see them succeed within the greater framework of American society. They are very American, but are also Lao. The things they write allow me a perspective into Lao culture that I'm seldom able to get from my fellow falangs, yet they can express it not only in the language of America but within the cultural context of modern American life.

Some of the blogs I read are written extremely well with a poignancy about life and it's connection to their Lao-ness that cuts to the quick. I don't link to these blogs. Some of them are very personal, dealing with matters of self identity and family. I think they might well be written for a limited audience. My web crawler sorts them and alerts me to posts.

The photographer and artist below is someone who obviously knows his blog might well be looked at by many people so I link here. Take a look especially at his drawings, you can find many via the link on his side bar. They seem to be from photos but with a soul inserted into the image. They are very realistic, but even more true than a photo if you follow me. 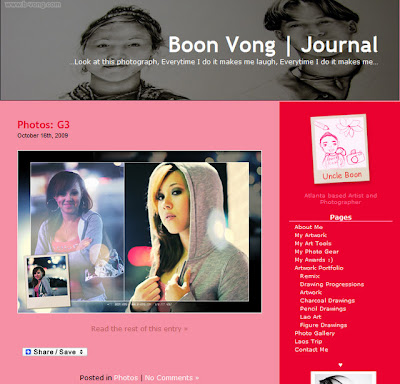 Time and again I think I recognise the people in the pictures only to realize that they aren't some one's kids I saw at the party or down at the Lao store. They are as Lao as the sound of the saat hitting the coke, or the steam of sticky rice in the kitchen or tang jeao padek. And they are 100% American.

When the charger broke

My camera uses rechargeable batteries. Mostly I like it, one charge lasts a long time, no batteries to throw away. I keep everything charged up as much as I can. Never know when there might be no electricity for a while.

So I was sitting in my hotel room minding my own business and my camera battery charger starts doing one of those sparking smoking type things that you just know aren't going to end up well. By the time I unplugged it whatever was happening had finished doing it's thing.

I was concerned but not despondent. Three fully charged batteries might well last quite a while. No reviewing and deleting photos, just turn it on, snap, then off it goes. More than likely the geniuses down at the market could fix it.

So down the the big market in Pakse I trotted, or scooted to be more exact. I walked through the phone section until I found a store that not only worked on phones but had a few cameras and video cams lying around in various states of repair. I told him it was sick, figured that was close enough, and he peeled it apart stuck the ohm meter on it. Ten seconds later he speed dialed someone, hung up and said, "Lao no have" then looking at me and using the probe from the ohm meter to point at one of those tiny cylinders with wires coming out the end said emphatically, "this, this, this, no have in Lao"

Yes he was speaking English, doggone kids. Probably Vietnamese or Chinese or something. No doubt hated English in school but aced it anyway to go to the good college. And that third language without even trying he speaks it a lot better than I speak the language of the market. I thanked him heavily, he smiled, shrugged his shoulders and said, "maybe Thailand". I still had one possibility.

As soon as I got to Vientiane I got myself on down to the morning market. They are tearing it up and it's hard to find your way around now. Huge pieces are construction zones. Shame really it used to be pretty easy, all the stores that sold similar stuff in one place, many ways to enter or leave each section.

The gold repair used to be along the east side back in the day, adjacent to the street across from the bus station but a little further down. Now it's just off the corner on the east side and no parking on the street. The turn in is where they take away all the trash too so it's not always pleasant. 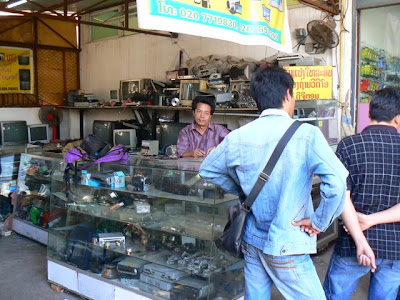 He's the guy behind the counter

I found the gold repair places and sure enough that same guy was there who fixed my telephoto back thirteen years ago. We spoke Lao. I told him I didn't think it could be fixed in Laos. He did the same thing with the call on the cell phone but told me it would be 300,000 kip and the part would come from Udon Thani on the bus. I said great. Then he asked me if I understood and started to write it out so I repeated it slowly and said I understood. Some electronics store in Udon Thani would have to ship it on the bus, it would get left across the street, and he'd go get it and probably pay the money which would then reverse the same route. I thought the charge reasonable.

Lots of love for old TV repair men who have evolved with the times and also young smart Asian techies no matter thier country of orgin.
3 comments: Links to this post