Moke is one of those foods that just lends itself to wild meat. It’s a steamed dish, and the steaming releases all the flavors, especially if the meat is tough or has bones.

Regularly Moke would be made by wrapping the ingredients in banana leaves and steaming it for a long time in the sticky rice basket covered. We live in the US with all kinds of kitchen gadgets. In our case we use a baby food steamer for all steamed foods, and a food processor in place of the coke and saht. (ubiquitous mortar and pestle found in all Lao kitchens) The saht still sees lots of use in our house, just not for moke, too much work what with the sticky rice and all. 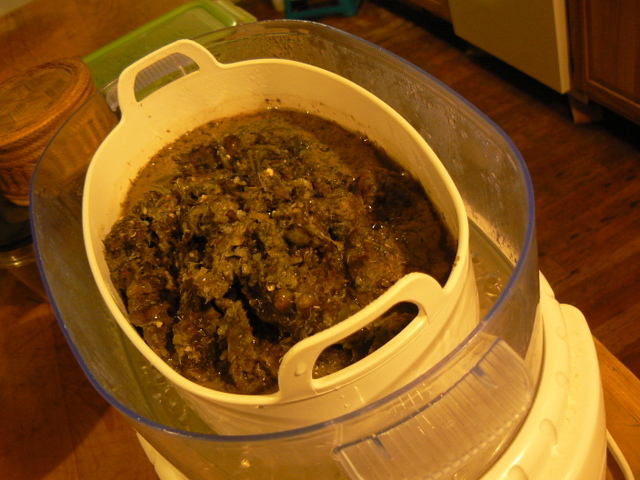 The baby food steamer. Another kitchen appliance I whined and complained about. Cost second hand $10. Use, often over ten years. It's also possible to steam things inside banana leaves in the baby food steamer for that real authentic taste like with those sticky rice and coconut milk deserts where the slight taste of the leaves is important.
Into the food processor goes kafir lime leaves, garlic, a scoop of padek, some galanga, some pre soaked sticky rice, a few hot thai peppers, bang nua and salt.  Combined with that puree were generous amounts of fresh dill and lemon basil then the entire thing was mixed with chunks of the elk and put in the steamer to be forgotten for an hour.

The amounts of the herbs and spices weren’t measured and I’m not the cook so I don’t know quantities,  I do know that in general they are way too much. Subtle lingering hints of flavor are for some other cuisine, this is supposed to hit you in the face and open up your sinuses. Where a sprig of fresh basil might do, handfuls are used, not a leaf or two of kafir lime but ten or fifteen.

When padek becomes a flavor lost in the background you know you’ve got some tastes going on. The bai ee-too (I hate calling that stuff lemon basil as it is neither) also fades. Even galanga, I know it was there but I couldn’t put my finger on it, and garlic, didn’t taste it.

The cut of elk is one of the most flavorful, it’s called ka lai which means “leg very much” (I guess), and that fits as it is the shank. One of those slim tight muscles of the foreleg that says speed all over it. Even though it’s not the most tender cut of the animal it’s one of the most flavorful, and when cut across the grain, it’s extremely tender. We often save that meat to use cut paper thin and layered across the hot bowl of pho cooked by the heat of the soup only. 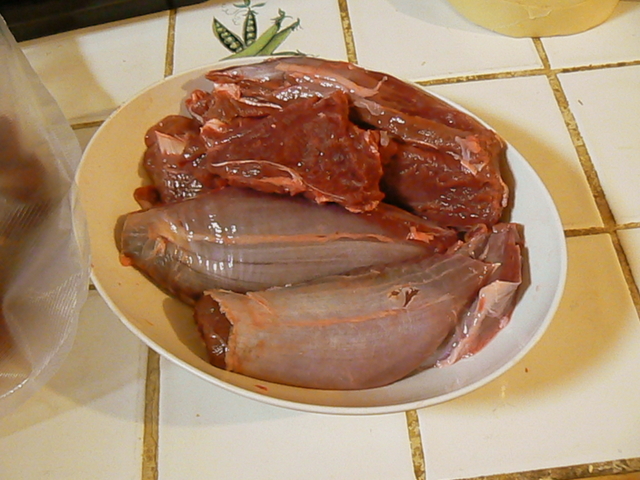 Kah Lai muscle with it's classic torpedo shape. This is actually a photo from a deer but oh well, you get the idea.

The elk is dark as is most game, darker than beef by far. The ground up sticky rice solidifies the whole thing into a mass that not only sticks it together but provides a handy catch all for the flavors and juices that come out during the steaming. I tried to pry the thing apart for a photo that would show the meat and it didn’t work. Moke is more a meat loaf than a stew.

How to eat it? With a fork I’d hope. Keeps the fingers clean. Still to be traditional I guess one would grab a little with a piece of sticky rice and a judicious use of a finger or thumb. I prefer kao jao (steamed rice, like maybe even that Calrose we buy at Cosco that comes from California), some lettuce or cilantro or something else green on the side. Cool water no ice. 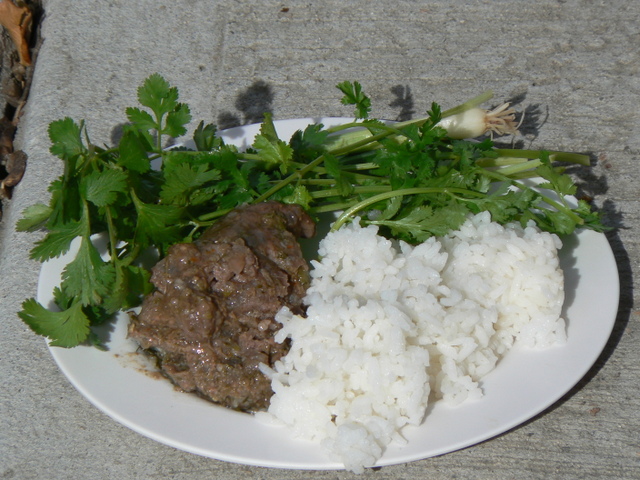 No way to pretty it up. Looks like glop, called moke.
Lastly an apology for not writing for so long. Haven’t been to Laos of late. Especially sorry about no food posts for so long. Way back when a frequent reader requested food type posts, I’ve been negligent, I promise to make amends.
No comments: Links to this post