I’m not much the sentimental type but when it came time to thin the herd I had little practical experience, and even less enthusiasm.

My wife told me to just knock it’s head against something, but to hold on to it after I did so. Made sense to me, the cook at the restaurant in China used to just give a quick whack with the knife handle to the back of the head of the rabbit he was cooking for dinner. Seemed quick and painless. Of course when I opened the coop the chickens all hid under the laying house where I couldn’t get them. Maybe it was the glint in my eye.

Later that week a friend of my wife’s came by and together while the children were inside they did the deed, slitting the neck, saving the blood, and boiling the plucked chicken to share in their mid week mom feast. Our herd of five had been whittled down to a more manageable four.

I have to admit a bit of squeamishness over killing domesticated livestock. Too much premeditation, too close to murder. I’m ok shooting deer or elk and even prairie dogs or coyotes which don’t get eaten but are traditionally shot in the rural west. Chickens seemed much more up close and personal.

My daughter often feeds the chickens pieces of grass through the cage. She knows which one is which, and when she came in saying they were pecking each other I went out to take a look. Sure enough a spot of blood on one of the black one’s neck. My daughter reported that Rosie the red one had pecked Black Black when Blacky Black was passing by. 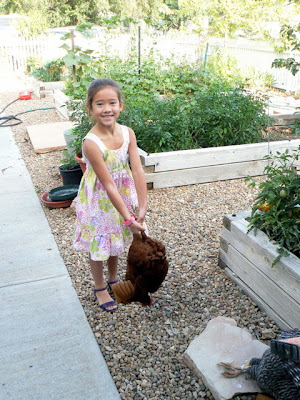 
If I’m squeamish about killing chickens I’m nuts over any animal experiencing pain. The fact that they were pecking each other too. Too many chickens too small a coop I figured. We had to be somewhat discreet as our town doesn’t allow chicken ranching.

The next morning my wife cut up some pieces of yarn, told the kids to stay inside and told me to come help. Sometimes when things need doing she decides to do them. She got in the coop, then confirmed with Thipalada, who had followed us out anyway, which ones were the pecker and peckee. She would first pick them up by the foot tie a piece of yarn around both feet then around the tips of both wings. Trussed up they were in no pain but they just lay there.

This is the condition you often see chickens in when being brought to market in Asia. Usually slung by the feet over the back of a motorcycle.

Once when I was the guest of honor at a suk wan at my sister in laws house, I remember a chicken being trussed up similarly. Bien had gotten the chicken early so that when the time came she wouldn’t have to chase it around the yard to catch it. While helping to set up the chairs and tables, every once in a while I’d hear a plaintive falorn squawk from the doomed prisoner. 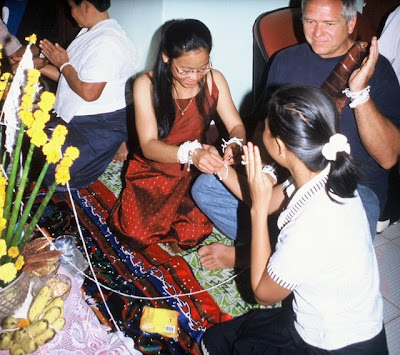 Suk wan ceremonies are quasi religious affairs left over from the days before Buddhism. Something to do with making sure spirits and ghosts are all where they should be and ones who aren’t supposed to be around get gone. I remarked that I wasn’t so worried about my ghosts but about the chicken’s ghost and that maybe we should have a suk wan for it. My inlaws thought this was pretty funny. It’s well known how sensitive the foreigners are about animals, and there is no such thing as chickens having spirits.

Recently when I asked why always chickens at suk wans and why always boiled I was told it’s because boiled chicken is a sign of luxury, all meat, no vegetables.

After both chickens were secured Thipalada helped bring them to the back door and mum got a pot of water boiling at her outdoor stove. I freaked when I saw ST hold the chicken down and pluck the feathers from it’s neck, but watching closely the chicken showed no signs of pain. Seems like docility is bred into them.

I held the legs and the wings with the head pointed downhill while ST carefully nicked the throat such that the blood ran down into a bowl of fish sauce. The blood is mixed with the fish sauce so that when it congeals it makes a tasty solid, kind of like the luet in kow piak. The only signs of discomfort on the part of the chicken came at the very end when it’s blood pressure was probably about zero. It thrashed a little but I’d been forewarned to hold tight.

When I got back from work all was in the freezer already except a delicious ope made from the livers, intestines, unhatched eggs, etc. It was delicious, none of that factory taste. Clean like game but not elk.

Later I noticed two hand lettered plaques by the hose. Rosie chicken pecker, and Blacky Black chicken pecker. We’d found peck marks on both. Don’t know what’s up with the markers, never did discuss death and dying with Thipalada, but then kids understand those kinds of things anyway. She eats the chickens with gusto unlike her brother who was slightly uneasy over the entire project.


What Thais Need to Know and Learn about Laotians

I saw this over at Samakamlao, that web site mostly for Laotians in Laos and overseas Lao. I did a simple copy and paste, even the little graphic below. No link to The Nation.
Share 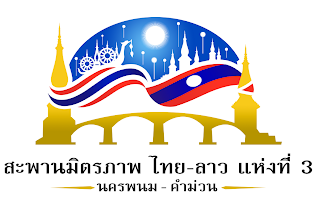 Of the nine other members of Asean, Thailand is most culturally, linguistically and economically linked to the Lao People’s Democratic Republic. The economic interdependence of the two nations is particularly important and Laos is clearly part of the ”Baht Zone”. The baht can be used easily anywhere in Laos.
Thailand critically needs energy imports from Laos and the Lao in turn need many consumer goods from Thailand. Also approximately one third of the Thai population has Lao cultural and linguistic roots.
Often Thais like to define their relationship with the Lao as “brothers and sisters”. but the Lao scholar and historian, Ajarn Mayoury Ngaosyvathn, instead calls simply for the nations to be close and friendly neighbours.
As we all know Thailand is amazing in many ways, but Laos is also amazing. What is most remarkable is that Laos has survived as a political and cultural identity despite being landlocked and surrounded by five powerful and much larger neighbours, namely, China, Vietnam, Myanmar, Thailand, and Cambodia.
Unfortunately there are many Thai misunderstandings about Laos and the Lao. First, many think that the Isaan (Northeast) language and Lao language arethe same. They are indeed similar but not the same. Once they were the same, but diverged over time because of 1) French colonialism, 2) communism, and 3) the Thaiification of the Isaan language.
Nearly all geographic and mathematics terminology in the Lao language, for example, is Frenchderived. If a person asks for “galaem” in Isaan, they will normally get a blank stare. “Galaem” is the Lao word for ice cream.
A second misunderstanding relates to the phrase “mai mi arai” (there is nothing there) referring to Laos. Many Thai travel to Vientiane, Laos for just one day, not even staying the night. They shop at the ”morning” market, have lunch at a nice restaurant on the Mekong, and visit a couple of prominent temples. They have “done Laos”.
I once took a group of Thai students on a study tour of Laos for two months. At the beginning they could not fathom why we were spending two months in a place where “mai mi arai”. At the end of the two months, they indicated a desire to stay longer. Obviously over time they came to realise how much there was to learn about Laos.
The Thai history, geography, and social science curricula on Laos need to be reviewed and revised. Students, for example, should be exposed to both Thai and Lao perspectives on the historical relations between the two nations. They should examine King Chao Anu both as a villain (Thai perspective) and hero (Lao perspective).
They need to analyse critically why Laos became communist and why the new government significantly reformed the Lao language.
They need to be exposed to how the Thai and Lao languages are the same and differ. The word “Thai/tai” is particularly interesting. In Thai, it means free, while in Lao it means people. Tai Luang Pabang, means Luang Pabang people, not Thai people living there.
As part of both cultural and moral education (and given the growing influence and power of social media), students need to know that ethnic jokes aboutthe Lao and Isaan people are inappropriate. Some of the gross ethnic jokes I have heard about the Lao are unprintable here. Also celebrities in their interviews need to be culturally sensitive in their remarks about the Lao. Some unfortunate incidents have occurred in the past.
Thais need to study and be more aware of more important Lao scholars and writers such as the prominent historian Maha Sila Viravong (originally from Roi Et) and his three children, who are all noted writers, and Ajarns Pheuiphanh and Mayoury Ngaosyvathn, prolific Lao scholars and historians.
One enjoyable technique for teaching about the subtle differences between the two cultures is to present ambiguous images of both cultures and have students themselves ascertain which image is Thai and which is Lao. Watching critically movies such as “Sabai Di Luang Prabang” can also be a fun and effective way for Thais to learn about their important neighbour.
Even though most Lao can understand Thai, they deeply appreciate it when Thais make the effort to speak their language, which is relatively easy, giventhe similarities between the two languages. Dr Sumontha Promboon, former president of Srinakharinwirot University, made a great effort to speak and write Lao well, when serving as an ADB consultant in Laos. Her effort was extremely well received. HRH Princess Maha Chakri Sirindhorn, former Prime Minister Anand Panyarachun, Prof Charnwit Kasetsiri, Dr Prawese Wasi, and Sulak Sivaraksa have all shown impressive and exemplary cultural sensitivity in writing about and interacting with the Lao people.
What is most important for the future of ThaiLao relations in the AEC (ASEAN Economic Community) era is for Thais to enhance their cultural empathy of the Lao and their rich cultures and history.
Article originally published in The Nation, June 25, 2012
by Gerald W Fry, Distinguished International ProfessorDepartment of Organisational Leadership, Policy, and Development, University of Minnesotagwf@umn.edu
No comments: Links to this post