A land with no trees


Crossroads from EIA on Vimeo.
No comments: Links to this post

Walking out to the road

The road means different things to different people. For me it meant a return to the power grid, cell phone coverage, showers, beds, restaurants. For Lorphaew’s son who was along for the walk and had never seen a road, it meant a lot more.

We get up early, I fill my water bottles from the cold water in the kettle and we leave. Tui, Lorphaew carrying my pack, Lorphaew’s son, and myself bringing up the rear. I don’t think we even had a hot breakfast, cold rice and water. Tui remarked this was a record early start for him, maybe seven o’clock.

The day before I’d cut a three inch hole in my boot to match the inch and a half hole in my foot, covered them both tightly with athletic tape, hoped that the pressure would be relieved, and crossed my fingers for luck.

The first part of the walk followed the path from Jakune Mai to Jakune Gow, I’d been on the trail four times before, that didn’t make it any easier. We stopped to wash at a stream crossing, from there the trail goes up and up and up, maybe 1800 feet or more. The first time I was already tired after two long days and I was lying down at the rests, took the starch out of me. This time at least I stayed standing to catch my breath. 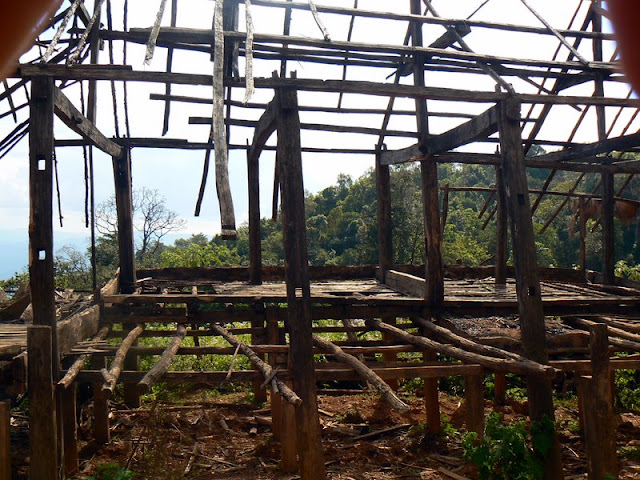 Lorphaew brought up the rear carrying my pack and his presence made the effort easier. I speak no Akha and he speaks no Lao, and so we can’t talk, but when you are the slowest it’s nice to have someone behind for company who doesn’t push.

Much sooner than I’d of thought we are at Old Jakune, in the two years since I’d been there it had melted further into the forest. I had to wonder how long it would be before only the discerning eye would know that here for decades uncounted, maybe centuries,  was a village where people were born, lived to bear children themselves, and passed on. How quickly the trees grow. The time comes for everyone and we all fade from memory.

Just above the old townsite is the trail junction to Nambo, more faint than the trail to town. Probably not many make the long hike to the Lahu village. Young men going “visiting” more likely than not. Our route took us still higher, almost to the top of the highest mountain in the vicinity, Phou Mon Lem, a name that has something to do with the long grass that grows around the top.

When we cross the ridge we stop and I take a photo. A poor and uninteresting photo at that. Some tree covered hills, some fog, barely imagined further hills. I breath deep wondering if this is my last view of this area. Close by are the hills on both sides of the Nam Fa, the river valley without roads or cell phone coverage, trees never cut, river never damned. Beyond is the Nam Mekong the riverine historic waterway of south east asia still in fog and wide, and on the other side of that, Shan State, the part of Burma ruled by an independent army. 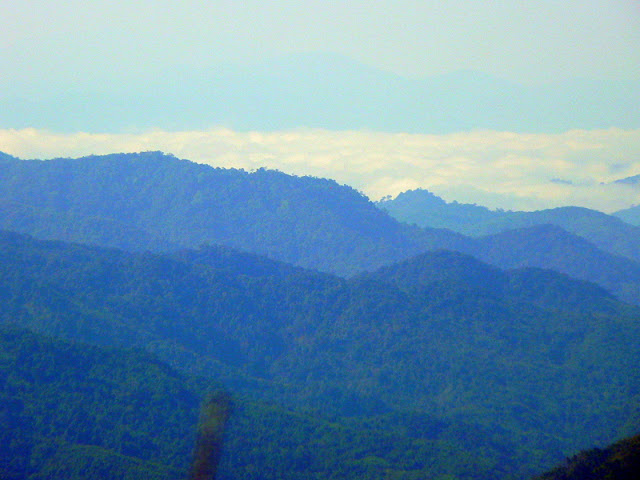 After the top we began to see survey markers. A Korean mining company is intent on developing a copper mine and making a road. It will certainly change things. Tui says he understands us Falangs don’t like to see roads. I don’t mind roads, but I do like the untracked forests and miss them when they are gone. It would be great if Lorphaew and all from his village didn’t have to walk so far to go to the market, or the doctor. More worrisome is the potential for pollution from the mining, I doubt there would be any environmental restrictions at all. A lot of villages downstream.

The walk downhill is at a much more moderate gradient. Once in awhile more survey flags from the intended road. The path cuts side hill amongst very old large trees, the walking is easy, cool in the deep shadows. The trees and the path might well have both been there when America was fighting it’s war for independence. A land without roads doesn’t mean a place without history or people 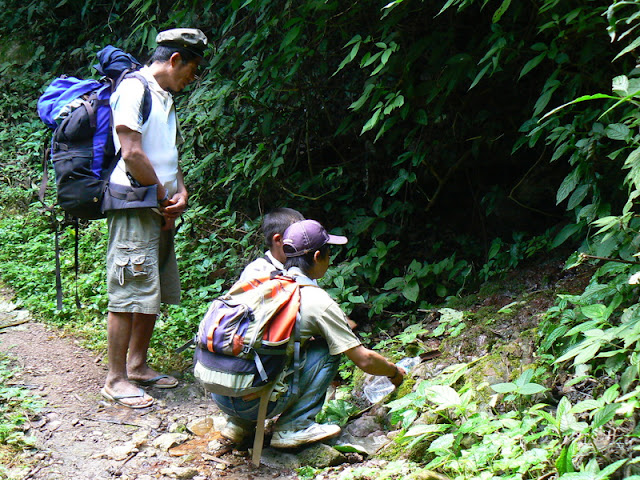 Drinking from the spring, Lorphaew, his son, Tui.

All too soon we are wading the river for the seven crossings that mark the approach to the Lanten village that is where the trail meets the road. A  young guy has driven his motorcycle into the ford to wash the dust off, it is colorful new and fast looking even sitting still. Lorphaew’s son stares at the bike with intensity, he has heard of them. Later Tui’s friend arrives in a decrepit minivan without seats to give us a ride to town. Lorphaew’s son watches carefully from where we sit on the floor in the back as we bump along, when the road suddenly becomes paved and the minivan twists through the S turns his jaw drops in wonder. On the road again.
No comments: Links to this post