The links are down, you tube taken down by Jonny himself. I'm back to re write and repost different vids.


I hadn't searched for Johny Olsen on you tube for a while. He has more recent solo and improvisational recordings that I love. I've been a big fan ever since seeing his hastily shot videos made in Thailand in some one's back yard against the backdrop  of a falling down chain link fence.

He also does these kind of funny electrified hip hop things that are also very Lao but with a modern interpretation. Besides being a recognised khaen player Johny sings Lum, often accompanied by the traditional skinny teenage dancing girls in funny costumes. The production of some of the things he did a few years ago are very very Lao, like what you'd see during a hot day on the video player of a long distance bus.

Lum like many kinds of music I hadn't heard before took some getting used to, but after being subjected to a steady diet, sometimes non stop, it grows on you.

Below is the one with the dancing girls 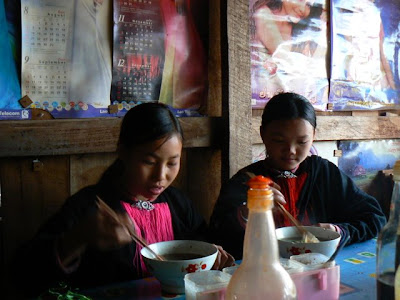 Yao breakfast at Ou Tai
I'm reposting this to change the name on the link to protect anonymityIn response to a photo of some young Lao Sueng women, whose ethnicity I was unable to pin down, I got a comment and then an email from a French fellow who has walked the length and width of Phongsali province, mostly off road.

We both had photos of the same town high on a ridge above the Ou taken from the same spot. LP's photo was taken four years earlier before metal roofs. The trek he describes was done in the fall of 07.

Original in French here, http://voyageforum.com/v.f?post=1495745 you need to cut and paste to go to the post, I think there are is stuff in the link that isn't html.

I should add, LB does all his walking without a guide, but, and this is a big but. He can speak many minority languages and has spent a good portion of his life studying these people. He has an intuitive sense of when things aren't going right as well of all the complications of being a foreigner in these different villages. He is probably more knowledgeable than many of the local Lao guides I have walked with. He travels by himself, but I'd suggest you not do the same, I'd go so far as to recommend that you don't. 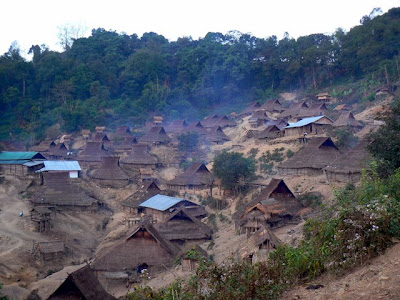 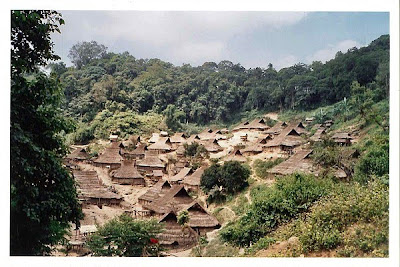 Same town in 03 from a scan of one of Lionels photos.

In 2006, in the far north of Laos, the first trip of 34 days, alone, on foot and without a guide in the mountains of the fascinating province of Phongsaly (summarized> ICI), allow me to do some bearings.