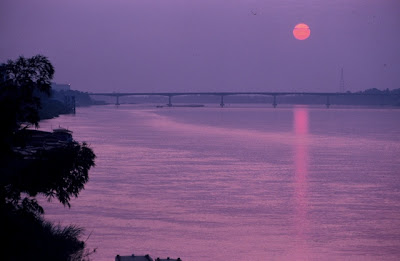 Sun setting over the bridge on that day a decade and a half ago
Laos began for me the way lots of things do, as a visa run.

It was the late in the dry season 1995 when I found myself sitting in a nearly empty restaurant in Thailand, the place was set out over the Mekong. I was waiting for time to pass. My visa was for the next day. I had no book. Internet wasn’t yet, and there were no other people to while away the time. I did as many others have done before and since. I stared at the river mesmerized by it’s endless twistings and turnings as it slid by the front of my view. I nursed a beer or two for several hours.

Before dusk is a quiet time. Motors and air conditioners cease, people take their evening bucket showers and quietly gather for dinner. The Mekong is wide at Nong Khai yet when a fisherman cut his motor a mile out I could hear every scrape of his movements as he put out a line and moved a paddle in the bottom of the boat, he might well of been ten feet away the sound carried so well.

Quickly dark came and the lights of the luxury hotel up by the bridge came on as well as every little restaurant and house up and down the shoreline and in the town behind me. The number of lights was doubled by their reflection in the water.

It was when I looked across the river for the first glimpse of the lights of the country I was to visit that I noticed the difference. Laos was dark, lights out. Not the glow of one bulb from one single restaurant or house. No lit up half built construction sites, no hotels, nothing. The contrast was stark, on the Thai side was the shimmering gaudy beginnings of another night of the dazzling, lit restaurants, hotels, and sing song bars.

Across the river dark and silent trees.

I had one of those non immigrant double entry visas to Thailand which were the semi official long stay visas for people the authorities for whatever reason were ok with. All I needed to do was leave Thailand and do a U turn at the border, get stamped out, get stamped back in, and I’m good for three more months.

The usual routine was the multi day train ride to Malasia and back, but of late there were rumors of not only tourist visas to Laos but also available in 24 hours at the border close to the capital. I was living between Lam Sak and Petchabune on the edge of Isaan, Laos was close.. My employer was understanding and I was making a small vacation of the whole thing.

Laos wasn’t so much a step back in time, but a different ending to the same story. The currency had too many zeros, the roads weren’t paved, a lot of people lived in bamboo houses, hardly any traffic. People walking, too poor to buy a bike or take a bus. No traffic lights. No advertising signs, lotta dust.

The language was different, more tone range. The people laughed easier and louder. Women wore the long traditional skirt called a sihn and wore their hair long. Commerce was at the market, people raised chickens and grew vegetables in the city center. The men had hair cuts and clothes of two generations ago. The light filtered through the ubiquitous red dust gave everything the sepia tone of old photos, I was smitten.

Laos was a country just emerging from a long self imposed exile from the family of nations and after a quarter century of slumber it was slow to shake off the sleep. A Rip Van Winkle of South East Asia with a Ho Chi Mihn countenance. 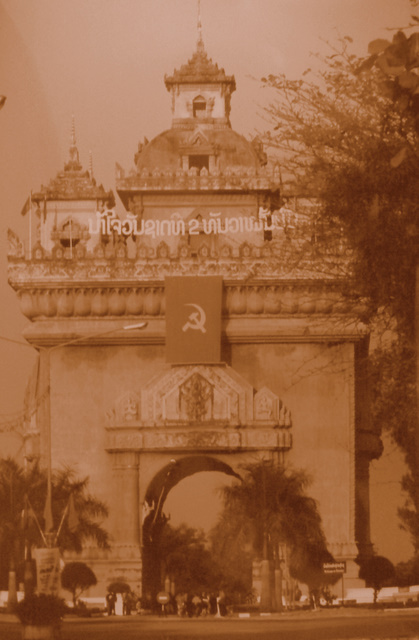 This is actually from the time of our first trip back in 01
No comments: Links to this post

The US ambassador to the Lao PDR has a blog 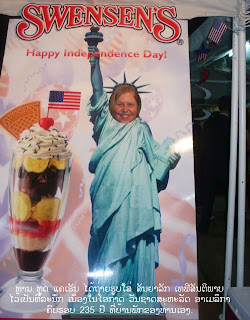 Usually the Embassy throws parties to celebrate special occasions like holidays or anniversaries. But sometimes we throw a party just for the heck of it!