I saw this video clip over on a blog called friscodude. The blog itself is worth a look. Written by a travel writer, Carl Parkes, based in Thailand, it is Asian themed but not necessarily restricted to travel. The writing is good and there's often new material.
No comments: Links to this post 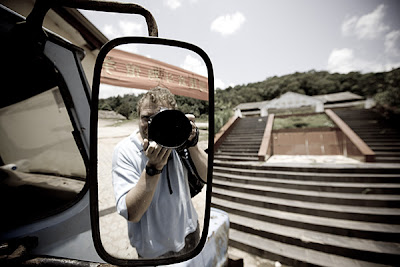 Self Portrait by Craig Schuler at the Chinese border Phongsali Province Laos. Abandoned Casino in background

Craig studied Thai language formally, and then taught himself Lao language. He gets on well with people and that's obvious from his photographs. People enjoy having him take their picture.

Craig's latest series called sitting on top of a million elephants is kind of a play on words. Laos is called the land of a million elephants and the province where Craig took his most recent series of pictures is the northernmost province in Laos extending by itself way up into the space between Vietnam and China. Not only are the photos from this northernmost province, they are also from the most northern district within that province. Truly Sitting On Top Of A Million Elephants

The name of the district is Nyat Ou, and the Province is Phongsali. I visited that district briefly while in Phongsali at Craig's recommendation. It was everything he had described and more. Ou Tai was remote and seemingly influenced very little yet by the rest of the world.

I'm not sure how many photos are in this set. Many more than any I've ever seen before from Craig. Usually he's very stingy with the photos. Perhaps he had many more "keepers" with this batch.If the links don't show about 100 or more black and whites of rural Laos, email Craig and demand he make the images permanently available for view.

Since I originaly posted this, things have changed. There now seem to be 12 photos all looking kind of like old colour prints, I think this is, as as called on his link to as "treated colour". Interesting to see them first as black and white, and now as faded colours. Some of the images I remember from a year ago as having vibrant but natural seeming colours. I'll have to watch and see what's next.

Update on the update. It seems as if Craig didn't get much response on the original series of black and whites, so he opted for the fall back photos. Craig promises to make the black and whites available again soon. Send an email to Craig by clicking here and going to the portion of his web site that says "contact" tell him to bring back the black and whites

He has had two other sets of color photos on the same web site. I liked both of the other sets, they were tremendous in their own right, but these photos seem to build on his earlier work and go beyond them. The black and white adds to the feeling of timelessness. If you didn't know already when they were taken you might think they are from ten, twenty, fifty or more years ago.
1 comment: Links to this post

Of Laos and Laotians 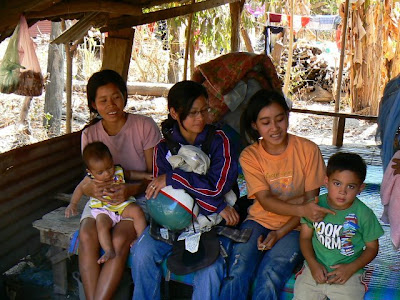 A great post follows about a controversial subject from a Lao American young woman whom I just happen to agree with, or else why quote it, right?

The quote within a quote, is from her blog lao-ocean girl I think the quoted article within the quoted blog is by Grant Evans the preeminent Lao scholar. (correction it's by both Grant Evans and Nick Enfield published in the Vientiane Times in 1998)

This part by LA-ocean girl

I’m Laotian-American, but currently live in Korea. I’ve travelled around SE Asia and have met other backpackers who have travelled to Laos. There always seemed to be a discrepancy as to what the country was called. There was one group, including myself, who called it Laos. Then there was the other group, who thought they were "in" with the locals, and called it Lao. Sometimes I would correct people, but most of the time people mentioned the country in passing, so I let it slide. In addition, who was I, to correct foreigners that I didn’t even know. This may seem like a trivial point, but it’s always irritated me. Sure, the local people called their country Lao, but it was in the context of "Prathet Lao" or "Muang Lao". Literally translated, they both mean "Lao land" and "Lao country". Whenever I talked to my parents about Laos, I always refer to it as "Muang Lao," but that’s because I actually speak Lao. It just seemed pretentious of foreigners to call the country Lao. Aarrrgghh! But that’s just me… I don’t tell my friends that my trip to "Italia" was wonderful, I say "Italy."

Below is an article I found about this topic. It has some insightful linguistic information.

This part by Grant Evans and Nick Enfield. Grant Evans needs no introduction to those who read about Laos. Nick Enfield I hadn't heard of as I don't really speak Laotian, (I fake it and smile a lot) People who are into it would probably call him an ethno linguist or something.publications of Nick Enfield

There appears to be confusion among some foreigners in Laos about how to spell the name of the country known today by its official name, the Lao People’s Democratic Republic. In particular there is confusion about whether to refer to the country as ‘Lao’ or ‘Laos’ when writing or speaking in English. Historically it has been common for English writers to refer to the country as Laos when not using the country’s official title, and this is the standard form outside of the LPDR today. So why confusion inside the country? One source of the confusion for some foreigners appears to be that when they come to the country they discover that in the Lao language, the country’s name has no final ’s’. Indeed, there are no words at all in Lao which have a final ’s’. Some people therefore seem to think that it is more correct to say, for example, that Vientiane is the capital of ‘Lao’ rather than ‘Laos’. But where does this logic come from? There are a great many country names that are pronounced quite differently in English, or indeed are completely different words in the home language. An outstanding example is the country name ‘China’ which actually does not exist in any variety of Chinese. In Mandarin, the official language of China, the country is referred to as ‘Zhong Guo’. In Lao, China is referred to as ‘Jiin’. Another example is India, whose name in Hindi is ‘Bharat’, a completely different word to the English. Further away from the Asian context, inhabitants of the country called ‘Finland’ call their homeland ‘Soumi’. A better known European example is Germany, which is known as ‘Allemagne’ in French, and ‘Deutschland’ in the native German. All these examples show that it is quite common not only for the name of a country to be pronounced quite differently in various languages, but indeed may be a completely different word. We have heard reports where foreign experts have been instructed by some Lao officials not to use the term ‘Laos’ in their reports, but to call the country ‘Lao’ instead. "Laos does not exist", they have been told by officials. So, for example, we can find the following sentences in a recent UN document: "Reduction of rural poverty is a main motivating factor for rural development in Lao. At its stage of development, rural poverty reduction in Lao will come by increasing rural employment possibilities…" The uses of ‘Lao’ in both cases could have been ‘Laos’, and we would suggest that it is more desirable to use ‘Laos’ in these contexts. Only if the document had used Lao PDR’ in both cases would it have been correct to use ‘Lao’. It is a puzzle to us why some officials would issue such instructions to foreign experts. Despite that fact that the Lao themselves have their own distinctive ways of pronouncing the names of other countries, we can only think that this instruction is some kind of zealous nationalism which insists that foreigners use the name ‘Lao’ in the same way the Lao do in their own language. Such officials may be unaware that the Lao also force the names of other countries to conform to their own pronunciation conventions.

Consider the ways in which the Lao language renders the names of various foreign countries. While in the cases of Vietnam and Cambodia, Lao pronounces the names of these countries quite like the natives do, there are others that are extremely different in terms of pronunciation. Two good examples from Europe are Austria and Belgium. These are pronounced in Lao as something like ‘Ottalik’ and ‘Bensik’ respectively (from French Autteriche and Belgique). It so happens that English has a huge range of possible sounds that can appear at the end of a word. In English, the rounding-off of the word ‘Laos’ with an ’s’ is a very typical thing to do, as any Lao who struggles with an ’s’ on the end of every second word will attest. In Lao, however, and many other languages of Southeast Asia, it is impossible to finish a word with sounds like ’s’,'f’,'th’, and so on. In Cantonese, for example, there is a tendency to add an ‘ee’ sound to the end of words that end with ’s’. ‘Price’, for example, is pronounced ‘pricey’, or ‘tips’ becomes ‘tipsy’, and so on. Cantonese does not have a word-final ’s’ sound, and so it has to add a vowel so that the ’s’ can be colloquially pronounced. This process of changing the pronunciation of a borrowed word to conform to the conventions of the borrowing language is called indigenisation. Laos with an ’s’ was one solution in English for the country’s name. It could have been ‘Lao’, but it may well have been ‘Lao-land’, by literal translation from the Lao. This of course happened with Thailand when ‘Prathet Thai’ was translated as ‘Thai-land’. But, for reasons which are obscure to us, ‘Pathet Lao’ is not ‘Lao-land’ and nor is it a country called ‘Lao’. Indeed, the latter usage is quite marked in English, and when used by foreigners seems almost pretentious. Of course ‘Lao’ is perfectly correct in English when used as an adjective. For example: a Lao person, the Lao language, a Lao poem, etc. One other possibility that has tended to fall into-use is ‘Laotian’. So one can say: a Laotian person, the Laotian language, Laotian poem. This, however, seems to be losing out to the more economical ‘Lao’.