Phongsali was looking cold when I returned from trekking. We had ended our trek at the Nam Ou river, probably the lowest place in the province. The big drafty Phongsali Hotel with it’s open doors and windows to let the breeze blow through felt like a refrigerator. The gaggle of hotel girls seemed to spend their time hunched around the bucket of charcoal that served as heat in the lobby. No sun. Guests were scarce, I saw just about no one. 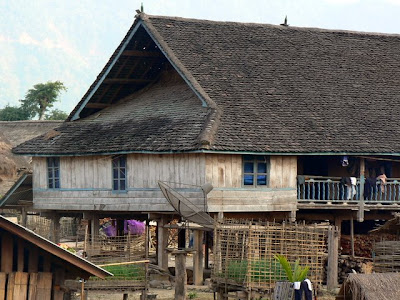 The next morning I left early for Boon Neua and Ou Tai. The bus to Ou Tai had been waiting our arrival at Boon Neua and I was happy to get a seat in the back. Sitting on the other side of the back was an attractive young hill tribe couple of an ethnicity I was unfamiliar with. The woman wore some kind of elaborate head dress and the guy had a black silky jacket. The girl was very beautiful, she and her husband exchanged knowing glances and held hands. The bus which normally seats 24 was quickly filled, people at first sat on stools then rice sacks, then stood pressed together like sardines. Once we were full the driver stopped for none of the people desperately flagging him down from the side of the road. Not much vehicle traffic up here I thought. 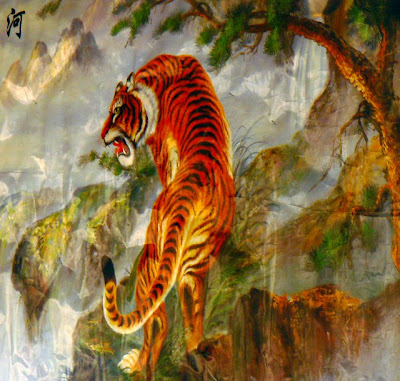 Rare endangered tiger seen beside the road to Ou Tai.

Meanwhile the attractive hill tribe couple had gone through the various stages of bus sickness and arrived at the last one. After riding for a few minutes first the girl then both of them went to almost sleep, then for a while the girl looked up and looked around worryingly then stared straight ahead with a fixed expression. Soon she spoke directly to her young husband and started to claw at the window clasp beside her, then her husband tore at it franticly. The young woman discreetly turned her head and puked on the curtain and behind the seat in the inches of space there. She must have had a large breakfast because there was a lot of volume. They were pulling too hard at the window and jamming the lock. Repeat the scenario twenty times throughout the bus and you get the idea, though most got the window open.
The road wasn’t that bad but then I wouldn’t call it a good road either. At first I thought that we were on the bad part and it would get better, it got worse. At one time it looked like a home made attempt to make it into an all weather road had been made by cobbling it with rocks. It was bumpy dusty and twisty. I kept thinking maybe we had taken a wrong turn because the road looked as if it were about to end, I thought no way could this be the road that continues for another eighty kilometres to Ou Tai and a further sixty on in to China.
Five and a half hours out of Boon Neua we rolled into Ou Tai 95 kilometres away. About seventeen kilometres or eleven miles an hour on average.
The guest house I’d seen on my way into town was full, of who I don’t know, so I went next door to the Chinese place the owner had pointed out. As far as I know I was the only falang in Ou Tai that night, elderly Khon Neepune don‘t count. 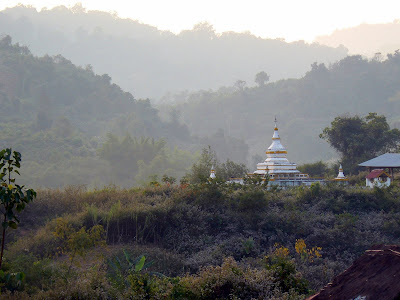 Ou Tai is without doubt a beautiful town. It’s on the Nam Ou a long ways above Hatsa and a long, long, way above Luang Prabang. Lao cell phones don’t work but Chinese ones do. The lowland peoples are Thai Lu which is reassuring. I know I’ve been away from it all when I am reassured to hear the Thai Lu dialect of spoken Lao, makes me feel warm and fuzzy, as if here are people I can understand. The only other language I recognised was Chinese.
The valley was a long and flat one, kind of reminded me of Muang Sing. Remote valley filled with rice paddies and a river winding through it all, surrounded by mountains. I didn’t see anything that reminded me of a restaurant other than places selling foe. The owner of the Guest House agreed to cook up some tofu and pork with greens. It was as I remember in China, swimming in oil but pretty tasty none the less. I managed to eat all the tofu but couldn’t even dent the greens. Each dish was enough for six people. 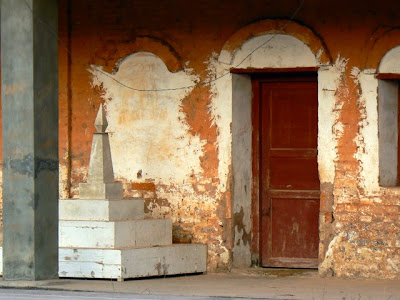 I met the army commander and the police chief both of whom were anxious to practice their English and guide me around if needed. They were both lowland Lao government officials.
I’m glad I went to Ou Tai, it was a beautiful remote town, but all I could think of was how many days I had in front of me just to return to Vientiane.
I began the journey the very next morning by getting up and heading for the bus station. It was early so I went to the busiest looking foe restaurant and sat down to a thirty cent bowl of soup. Lots of water a few noodles and some neck bones with a bit of meat left clinging to them in the bottom of the bowl. I was joined by two hill tribe girls of unknown ethnicity. I didn’t recognise any of the jewellery or cloths. The one directly across from me slurped down the noodles, chewed the gristle off the bones and ordered a second round. Hungry I guess. Wouldn’t want to be deserted on an island with her, I might end up getting eaten. 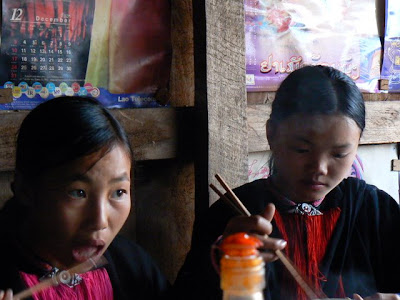 A little later a guy started to mosey on in with a couple well dressed foreign Asian grandmothers in tow. Tour guide with Grannies, I guessed them. He weakly smiled and answered to my “sabai dee”. I know how it is, tour guides often don’t know what to make of the independent tourist. I don’t know if they are afraid of all the questions we have stored up and having to work for free or what.
He warmed up as I asked him in Lao if he were a tour guide, then if the grannies understood Lao, then if they were Japanese, and then what language they used to communicate, who is that guy, the driver, and so on.
After he ordered them some soup both of the nice elderly women just walked on in to the kitchen without so much as a howdy do and started taking flash pictures of the woman who owned the restaurant cooking the foe, as usual the cooking was done on an open fire on the ground. They walked all around the kitchen flashing away and then walked on out. I could tell the restaurant owner wasn’t thrilled, the tour guide was studying his soup. Turns out he lived in Ban Tat Luang a section of Vientiane I’m kind of familiar with. Nice guy, nice Japanese grannies, of course they were astoundingly blatantly rude to the restaurant owner treating her and her kitchen like some kind of animal in a zoo, but I guess they came for souvenir pictures just like all of us, and I guess the tour guide’s job was to take them around to do their thing. Still leaves me wondering. 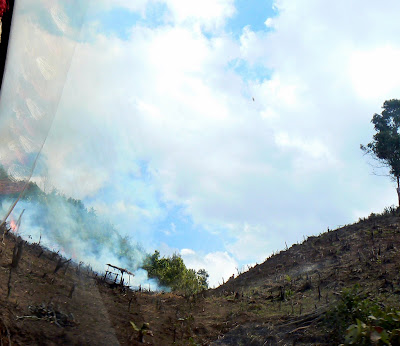 The bus station was still closed at eight so I went over to some people who were squatting around a fire made from some trash and sticks, Turns out they were the ticket sales lady, station manager, and the bus driver. When the ticket lady got up to go to the station I gave her a 50K note. I wasn’t the first to get a ticket as she had to sell a couple just to make change for my big bill. 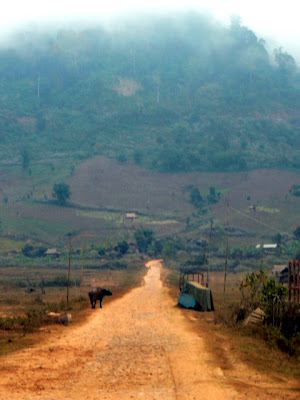 Road out of Ou Tai

As soon as I got my ticket I went over and stood at the locked door of the bus. It was the same bus I had come up in, the puke that had made it’s way out the windows was still visible from the dust that had stuck to it in long streams down from the windows. A quick peek through the windows revealed the bus hadn’t been cleaned at all. I stood with my nose against the door until the driver came up twenty minuets later got in the drivers seat and opened the passenger door. Then I immediately walked up front and got in the shotgun seat. I sat right there and didn’t even think of moving. No way I wanted to be in the back of that slime pit for another day. A rich Thai Lu kid who spoke some English handed me his back pack through the window and asked me to save the seat on top of the motor for him which I did.
The ride back was fairly enjoyable. Being in the front I was able to make my way out for pee breaks and to buy M150 and cokes. Even took some pictures through the windows. For fun I counted the number of Chinese trucks loaded with illegal trees cut from the hillsides. All total I counted ten by the end of the day. Not so many I thought, they were pretty small trucks, but the driver informed me that species of wood, mai jeune, is very valuable. Even saw a working elephant. 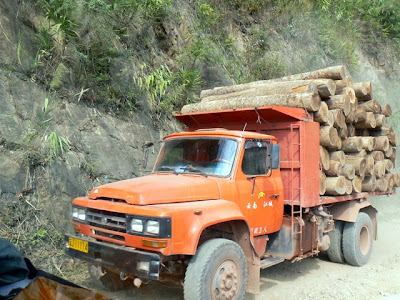 Phongsali province is pretty much uncut forest. Yes the capital town itself is of course cut off, but the areas I trekked in and the road to Ou Tai were fairly forested with the characteristic white trunked large trees that make up the highest layer of the woods rising above the canopy all over. I think slash and burn agriculture has had a negligible affect on the overall forest, there just wasn’t enough of it going on. It seemed to me that along the ridge tops where the upland peoples like to grow rice and corn there were bare patches, but overall it was a very small portion of the land. Even the trees the Chinese were cutting were only a special species and not the entire forest as is typical when they cut for lumber.
The driver, Thai Lu kid, and I had a fairly enjoyable conversation and ride oblivious to the people packed behind. When I asked the driver told me there were presently 46 paying passengers on board, he owns the bus and makes the profit. The maintenance must be horrendous, tires, springs, brakes etc., probably adds up to as much as the diesel.

"I was joined by two hill tribe girls of unknown ethnicity".

"I was joined by two hill tribe girls of unknown ethnicity".

They look very different from the Yao in northern Thailand. I wouldn't have recognised them.